As part of our history project, things are well underway on the restoration of Jinxter by Magnetic Scrolls. We're calling this one, "Jinxter Revived".

Magnetic Scrolls was a pioneer of artwork in interactive fiction, and was one of the first to commission professionally drawn pictures. In the early 80's, "high" resolution images were only 255x135 pixels, drawn by hand with an artist clicking on individual pixels with a mouse! We successfully used using pixel scaling techniques and color adjustment to help revive these images for modern high-res displays.

The original pictures were constrained to 16 colors, which also had to include black and white - for the main user interface. Most artists wanted black anyhow, but pure white was something they didn't often use. Some pictures cheekily replaced white with a near-white, which had the side-effect of slightly changing the rest of the user-interface, oops!

To mitigate the lack of colors, the artists resorted to stipple halftoning techniques. As seen clearly here on the Shipwreck picture from Jinxter. The stippling was all done by hand, manually clicking on each pixel. 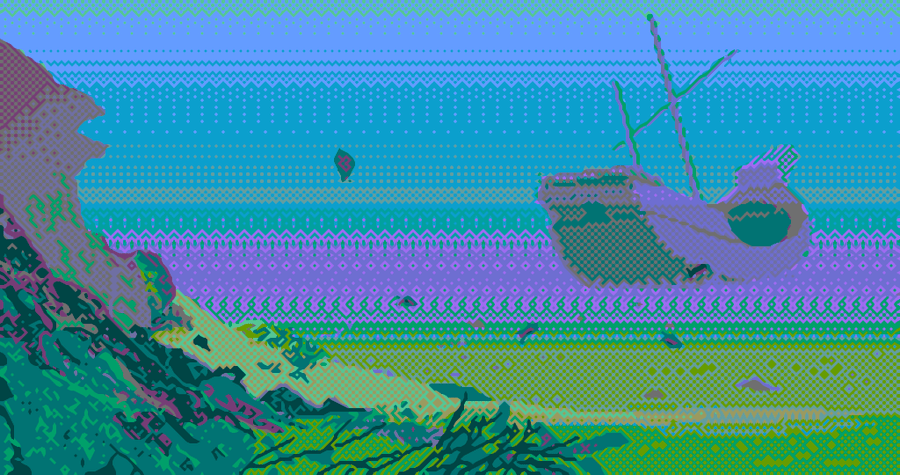 But this wasn't the only idea the artists wanted to try. In those days it wasn't known if traditional art genres would translate to the computer screen. For example, impressionism.

Unfortunately, it doesn't work too well, especially with 16 colors and low resolution. Here is "Inside the Bank" picture from The Guild which attempts an impressionist style for the people and the floor. 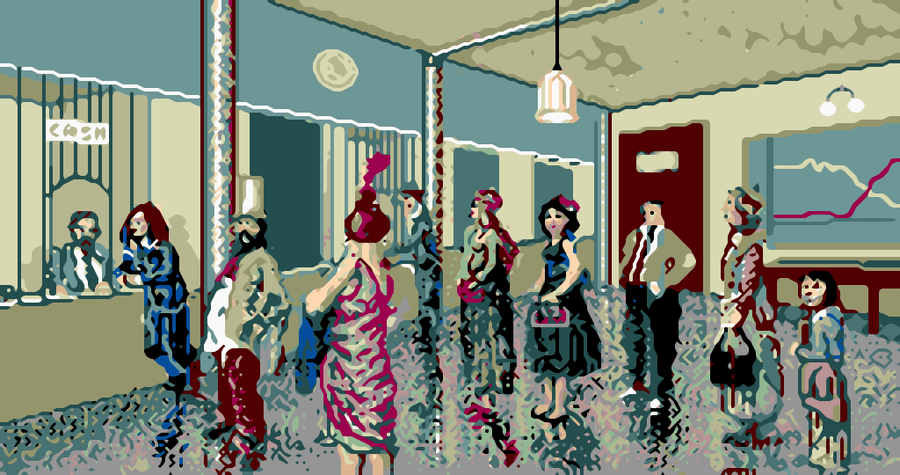 If impressionism doesn't work, what about post-impressionism? Here is the rabbit's bedroom from Wonderland. 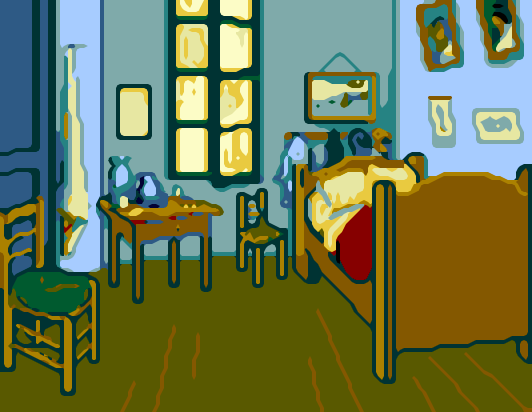 You'll recognise this as a take on Vincent van Gogh's Bedroom in Arles. For reference, here's the original; 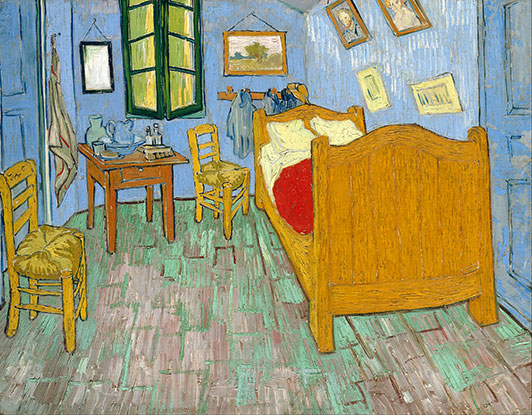 Art eh? Well, that didn't work either. It turned out Magnetic Scrolls received a few complaints about this picture. People said the perspective was all wrong and the drawing childlike. So, never underestimate your customer. Or should that be overestimate!

Low resolution, limited color artwork tends to work best with pastel shades, ie. ones avoiding high saturation. This tends to reduce the average palette color distance and allows a reasonable rendition with fewer colors. By contrast, pictures made from a few highly saturated, strong colors tend to look like cartoons. Indeed, the rabbit's bedroom above is somewhat cartoon-like.

Here are some examples from Jinxter using a pastel palette. 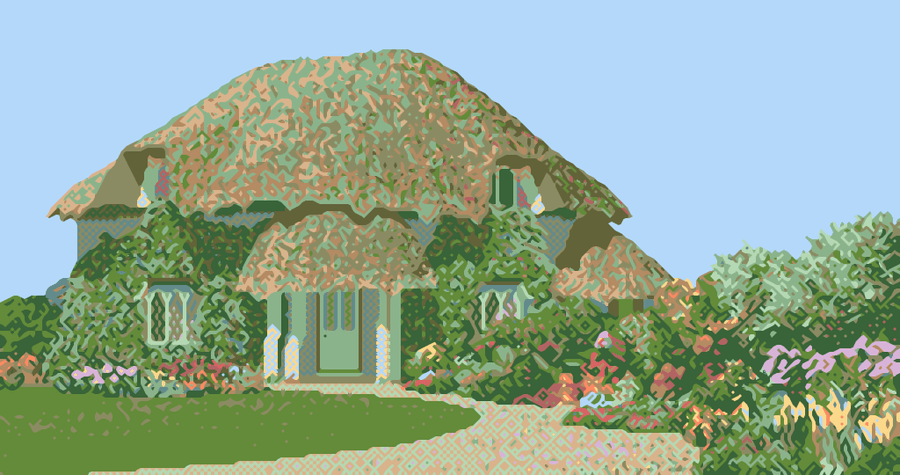 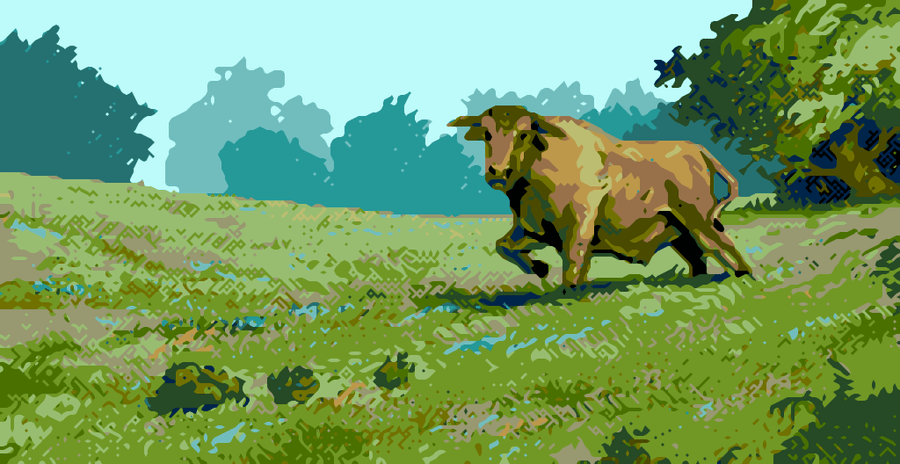 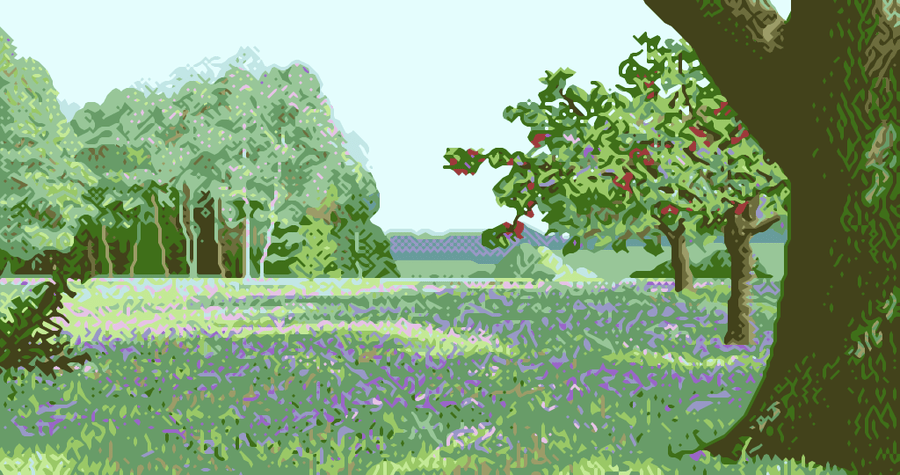 Earlier, I mentioned we wanted to do something new for the Jinxter Revived artwork. Well, all the original pictures are there of course, but we've got some new ones for many locations originally without illustration.

That is to say, with one exception;

One of the regrettable art mistakes of the original Jixter was the poor choice of artistic style for the "on the bus" picture. This, unfortunately, was not only the first picture shown, but the very worst in the game.

The impressionistic style failed to work, turning the piece from people "on the bus" to "zombies" on the bus :-(

Original, On The Bus

For the remaster, we have remade this picture in a more modern context.

Revived, On the Bus

All the new artwork is vector based, which gives a smoother, more modern look, but is also scalable as needed for modern high-resolution devices. Desktop displays are routinely 4K pixels now, and even mobile phones have stunningly high resolution screens. For example, iPhone XS Max at 2688x1242, Samsung S9+ at 2960x1440 and LG G7 at 3120x1440.

Zoom in and, although you can't get more detail, edges remain crisp. 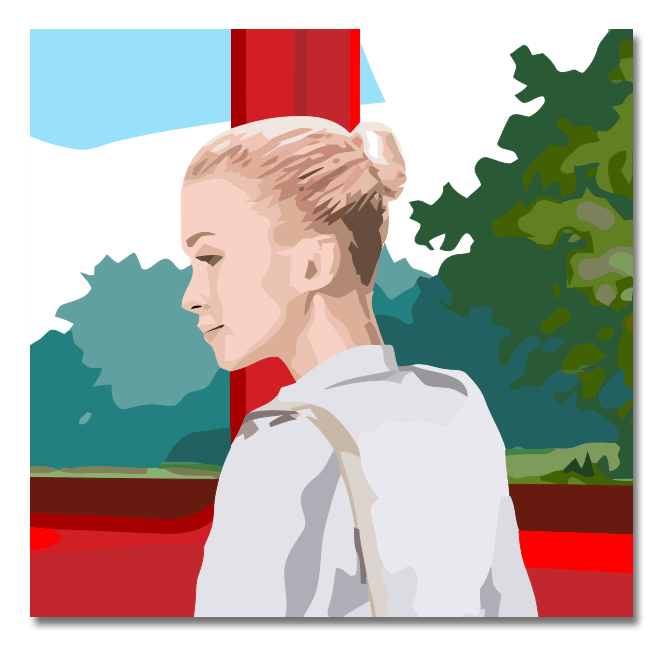 At this time, we have several fantastic new pictures. We don't however, know exactly how many new illustrations we'll have in Jinxter Revived because they're still being painted!

To see them all, you'll just have to pick up your own copy of Jinxter Revived when it ships! In the meantime, here are a couple of concept art sketches to keep you in suspense... 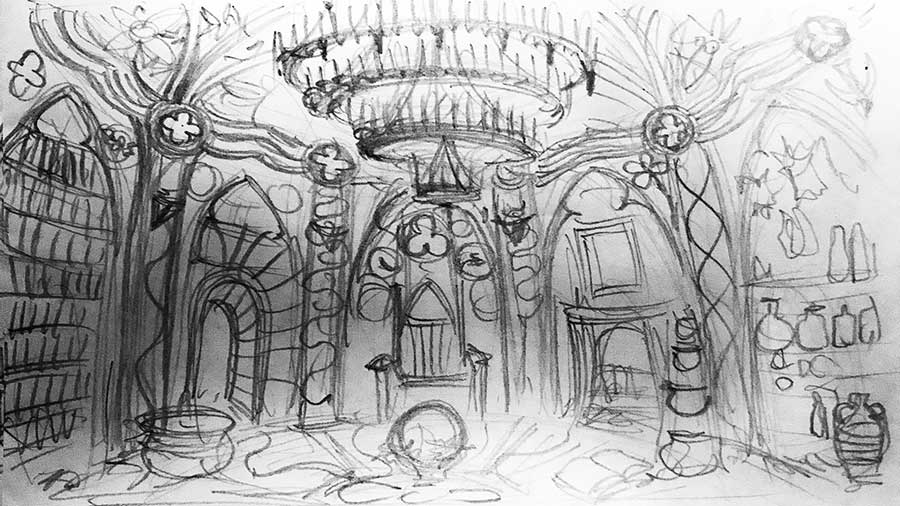 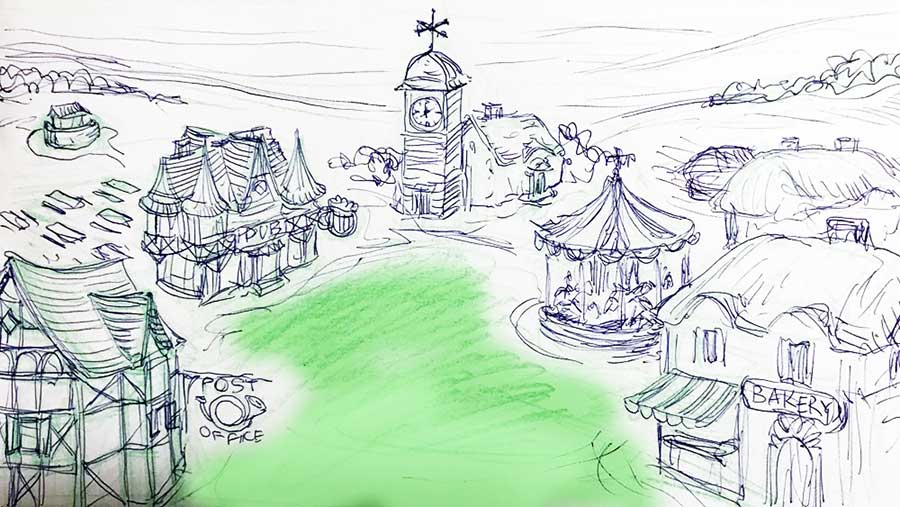