Yesterday I had a great meeting with Rob Steggles, author of several original Magnetic Scrolls games.

We talked about the possibilities of making expanded, extended, updated or even sequel versions of some of the original Scrolls games; things Rob always wanted to do back then but we couldn't because the machines just didn't have enough memory.

The idea has come about as a spin-off to the possibility that we might actually be able to recover the original game source codes and the build tools from the tape archives. If that happens, then why not make updated versions as part of our remastering project.

By the way, all the newly remastered versions have a switch in the settings to select between modern mode or classic mode. Modern mode enables all the new features like in-game help and puzzle assistance, whilst classic mode switches these off and reverts the game to it's original form. It would also switch off any newly added changes and extensions.

One of the fun bits that came out of our talk was Rob's idea of doing an "Easter Egg Walkthrough". The Scrolls games all had many, many hidden comedy bits, and some even downright oddball - did you know you could ride on top of the train in Jinxter whilst sitting in the deckchair!

The Pawn, for example, has many listen to jokes. Right at the start you can listen to the band, there are many others hidden in the game.

From the forthcoming PC version: 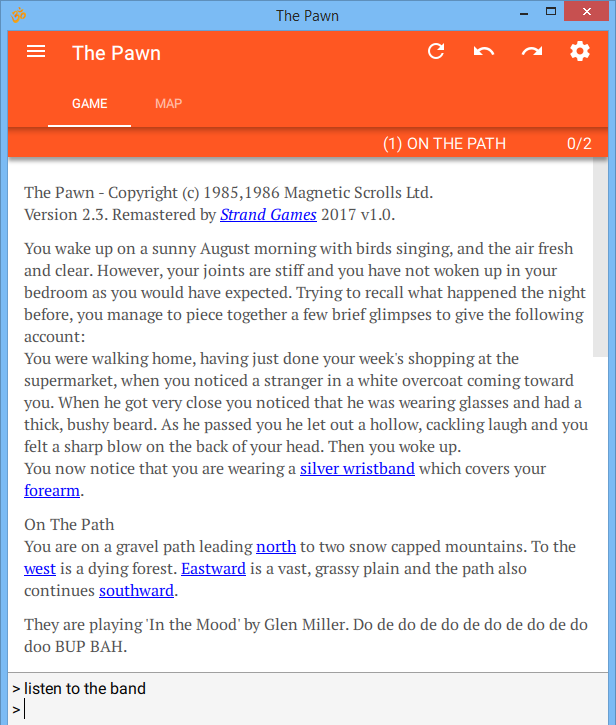 These haven't been added, they're original.

Here's another one from Corruption, Scrolls' non-fantasy, city thriller. Did you know you can lose the game in just one move? Unlike Infocom, who tended to prevent the player from doing silly things, Magnetic Scrolls had a much more laissez-faire - let them do it approach; especially if it was funny!

Corruption starts with you landing a fantastic promotion into senior management; high pay, new car, a big office, even your own secretary - everything looking great.

So what do you do? Shake hands with your new business partner, David Rogers?

Of course not. How about Punch David ! 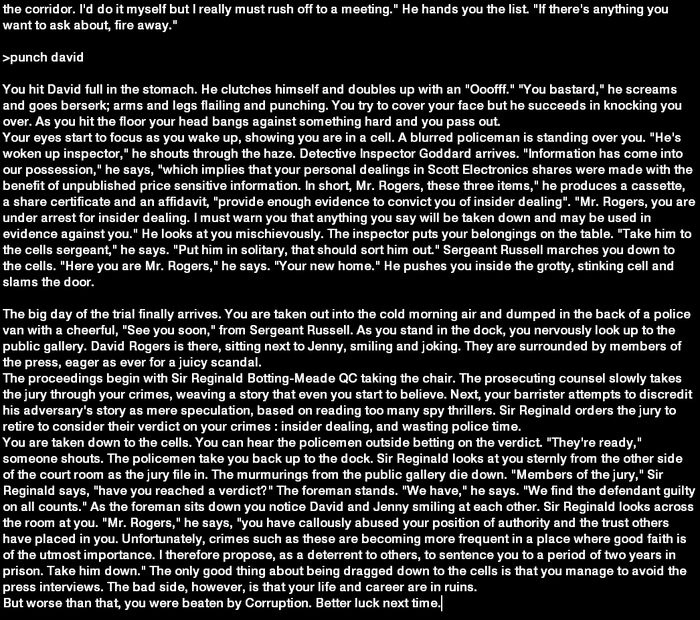 On the subject of Corruption, when we get around to the remastering, Rob says he'd like to expand on several areas of the game and add additional character features and new funnies!