Magnetic Scrolls classic masterpieces remastered for the Spectrum Next

Strand Games are happy to announce that the illustrated text adventure games The Pawn, The Guild of Thieves and Jinxter from Magnetic Scrolls are now available in remastered form for the ZX Spectrum Next. ZX Spectrum Next is a modern evolution and remake of the popular Sinclair ZX Spectrum 8-bit home computer from the 1980s. It is compatible with the original Spectrum and adds improved speed, graphics, sound and storage capabilities while still being true to its 8-bit origins. You can read more about the Spectrum Next at specnext.com.

The original Magnetic Scrolls games (except Wonderland) were available for the Spectrum 128/+3 but as text-only games without graphics. The new and improved versions for Spectrum Next contain full graphics, take advantage of the new hardware features and use the remastered version of the games with playability improvements, bug fixes and, for Jinxter, additional graphics.

The games are realized using a porting of the Magnetic interpreter to the Spectrum Next. The interpreter has been changed to work on an 8-bit system with 64 KB address space and banked memory. The porting has been done by Stefan Bylund and he will continue to work on Spectrum Next support together with the rest of the Strand Games team. The source code is available as open source on Strand Games' Gitlab repository. 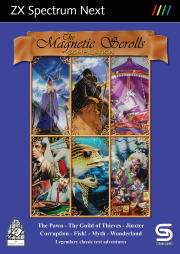 The Guild of Thieves